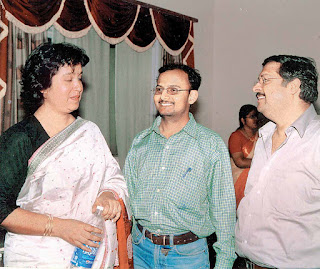 (Close your eyes and think once what you have done and what happens all around. )

As I know, Turkey is an ideal among muslim countries। What is the reason behind this?
It is a big history. Why and how, Turkey became a secular and not so Arabian. Many political things...I told you about American interest...Some countries fundamentalists. It was America, who created the muslims fundamentalists to fight the communalists during cold war. So, they.....Kamal Ata forced to bring secularism in Turkey. So, I don't believe for these things...country to democracy of secular. People should bring democracy to fight. Democracy within and from the country.
You cannot apply force. People should aware to democracy. Situation create the country. It is not. If you apply force, it will not remain. So, you should enter... Problems...if you give the free election in the fundamental rights. So, it is not, it cannot be democracy and secular. So, army in Turkey is secular. Therefore, fundamentalist should live to take the government too.
You understand, I am saying...
So, you cannot apply. People should be secular and they should fight or create their country secular. Otherwise, if people are not educated than the country would remain the fundamentalist, remain problem in tha muslim countries.

The original force of liberalisation of Islam lost all over world, what you think?

One another, personal question, what you feel when Bangal government banned your book 'Dwikhandita'।

Oh, I was surprised. I was shocked. I don't right... But many people protest against the ban.

I have read your two books 'Lajja' and 'Aourat ke hak men'. I am not found any wrong theories. But why some people opose your literature...
I don't know, but they gave reasons. The five books are ban in my country, Bangladesh and one is ban in India. So, they gave different reasons for banning different books.
'Lajja' was ban by Bangladesh government. Government gave the reason, it would create communal problems and my other books also banned.....It would heart the religious people. These some reasons were given by the government when banned.
So, those are...I think stupis reasons.
Actually, They don't want to readers should read the truth. Because told the truth, what happens in Bangladesh in 1992 after Ayodhya. That how Hindu people, hind minority or community suffer.
That I told the truth, but government try to hide the truth. And my other books that I wrote against the patriotical system and religious system that the government was fade my words. So, they banned.
The writers should have rights to write, writers to think or believe in and the readers should have to right to read, whatever they like to read. No government should have the right to ban any body's book. So, I am against banned or censorship.

My next book is the fifth part of my autobiography.

This work is licensed under a Creative Commons Attribution 4.0 International License.

Edited Book on Media (in Hindi)

A Collection of Maithili Poems

My presence on other world