This study likes to examine the Facebook posts of Media organizations of 2015, which were related to Indian Muslims and having more than one thousand comments. For this research, the pattern of Corpus-Assisted Discourse Studies (CADS) has been used and the words ‘Muslim’, ‘Musalman’ and ‘Islam’ are being used as topic modeling. The work deals with the heading of the Muslim related posts posted on the Facebook page of Indian Media organizations and their comments, shares and posts.
Keywords: Internet, Social Media, Facebook, Critical Discourse Analysis, Topic Modeling, Indian Muslims. 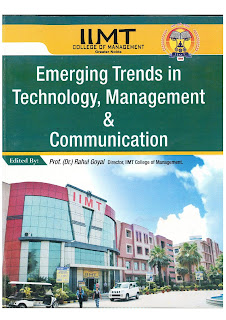 Introduction
Social media has become a very effective tool for sharing information and instrument of social change (Awan, 2017, Oboler, et.al. 2012). The voices of Social Media platforms are very powerful and they have the capacity to change the mind of the public and the power of the country (Shirky, 2011; Castells, 2007).). Social Media allows the public to create, produce, and store the contents (Sunstein, 2018; Jenkins, Ford & Green 2018).
Allen and Nielson (2002) argued that the mainstream media differentiated the pseudo-religious validation of terrorism and the Muslim faith. They use inflationary words and the terms as, Islamic Terrorism’, ‘Islam’, ‘Muslims’ and ‘Fundamentalism’ etc. in their headlines and confuse the readers. Media and Muslims are the hot topics for the research, but very little research has been done on the contents of Facebook and Facebook pages of the media organizations. Awan (2016) has conducted research on Facebook content and found the five frameworks around Islamophobia. His research is based on those Muslims who are living in the UK. Therefore, this study tries to feel this gap of research of Indian Muslims.
Objectives
•    To study the Facebook posts and their headlines which are portrayal the image of Indian Muslims.
•    To study the posts of the Facebook Pages of the media organization, which have the highest comments.
•    To study the topology of the subjects of the Facebook posts of the media organizations. 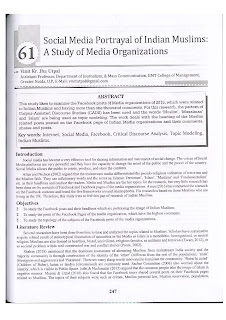 Literature Review
Several researchers have been done from time to time and analyzed the topics related to Muslims. Scholars have sustained to acquire related result of stereotypical illustration of minorities in the Media (Pool, 2002; Saha, 2012) as Islam is a monolithic, homogenized, or sexiest religion (Koteweg, 2008; Mishra, 2007). Muslims are also framed as heartless, brutal, uncivilized, religious fanatics (Shaheen, 2009), as militants and terrorists (Ewart, 2012; Ibrahim, 2010; Powell, 2011), or as societal problem (Bowe et.al. 2013; Hussain, 2007; Ibrahim, 2010) within well-constructed war and conflict stories (Akbarzadeh and Smith, 2005; Poole, 2002).
Shaban (2018) mentioned that the dominant instrument of alienating Muslims from mainstream India society and the majority community is through the construction of the identity of the ‘other’ (different from the rest of the population), ‘alien’ (foreigners and aggressors) and ‘Pakistani’. There are many slang words innovated to humiliate the community. ‘Babar ki aulad’ (Children of Babar), katua or landya (circumcised) are commonly used. Sachar Committee (2006) also worried about the identity, which is visible in Public Space. Jothi & Neelamalar (2015) argued that the common people take the image of Islam in negative manner. Meenai & Utpal (2018) also found that Facebook users shared several posts on their Facebook pages related to Muslims. The topics of their subjects were such as crimes, Muslim personal law, Muslim reservation, population, Madarsa, Fatwa, Talaq, conversation, beef, terrorism, Pakistan, Aamir Khan, Salman Khan, Shahrukh Khan, Modi, Prophet, Shiv, Babri Masjid, Vande Mataram, Kalam, Love-jehad, Sarabjeet, etc. during the year 2014.
Methodology
The Corpus-Assisted Discourse Studies (CADS) is the combination of Discourse Analysis and techniques for inquiries from Corpus Linguistics (CL). This method helps to study a huge number of unstructured data. In the techniques for inquiries from Corpus Linguistics (CL), the topic modeling is also important, which is associated with Computer Science, and through this, the recurring clusters of co-occurring words in a text can be found without the limitations of any hypothesis (Tornberg & Torenberg, 2016).
In this study, the topics are found with the help of the topic modeling approach and find all the Facebook posts, which contain case incentive search terms ‘Muslim’, ‘Musalman’ and ‘Islam’ and have more than one thousand comments from January 2015 to December 2015. These data were collected during July-September, 2018. Then, the headlines of the posts and the reactions (the number of comments, share, and likes) of the readers are also analyzed manually, identify, and categorize the pages of persons and organizations, which deliver the Muslim related posts. This paper also finds a topology of the subjects, which published by several media organization on their Facebook walls.
Data Collection
This research documented and studied all the Facebook posts related to Indian Muslims and have more than one thousand comments in 2015, find 180 posts on the Facebook walls of the organizations. These data were collected during July-September, 2018. 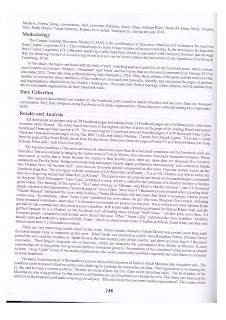 Results and Analysis
All these posts are present only on 30 Facebook pages and among them, 13 Facebook pages are of different print, television or online media houses.  The study found that there is the highest number of posts on the page of the leading Hindi newspaper Navbharat Times and their number is 29.  The second highest 21 posts are selected from the pages of ABP News and Amar Ujala.  There are 16 posts from the pages of Aaj Tak, BBC Hindi, and Dainik Bhaskar, 12 posts from Dainik Jagran.  There are 11 posts from the page of Zee News Hindi, Seven from Patrika News, three posts from the pages of India TV and News18 India, two from Kohram News and 1 post from Live India.
The top nine headlines of the posts are selected, which have more than five thousand comments and the Facebook walls are identified. The news related to hanging the Indian terrorist Yakub Menon, there are more than eight thousand comments. When news came in media that Sarah became the country’s first Muslim pilot, there are more than six thousand five hundred comments on Patrika News. Indian most readership newspaper Dainik Jagran published news heading ‘Love converted Hindu into Muslim, Now life became Hell”, more than six thousand people commented on this news. One user posted a post on her Facebook page that, “Do you agree with the statement of CM Manohar Lal Khattar…Yes or NO, Muslims may live in India, but they have to give up eating beef: Manohar Lal Khattar”. This post is also very popular and about six thousand people commented on this post. Hindi Newspaper ‘Amar Ujala’ published news, which is related to the statement of a Muslim minister of the Indian government. The heading of this news is “Beef eater must go to Pakistan, said Modi’s Muslim minister”, and 5.8 thousand people reacted to this statement on Facebook page of ‘Amar Ujala’. More than 5.7 thousand people reacted when a leading daily “Dainik Bhaskar” published the news with headline ‘Hindu Mahasabha will run Islam free India’s campaign, Causes poster controversy.’ In meantime, when “Amar Ujala” published the news about the girl that wins Bhagwat Gita contest, defeating three thousand contestants, more than 5.6 thousand commented are present on this post. When Bollywood actor Salman Khan got bail on one criminal case, then there is a news headline ‘BJP leader Sadhvi Prachi questioned for Salman Khan’s bail, said He got bail because he is a Muslim’ on the Facebook wall of leading news channel “ABP News.”  On this post, more than  5.4 thousand people commented and several users shared this post. When “Amar Ujala” published the news headline ‘Muslims should unite and make three pieces of RSS: Azam’, which is related to the news of Indian politician Azam Khan and this post attracts more than 5.2 thousand comments.
There are very interesting results found in this study. When content related to Yakub Menon was posted, more than eight thousand people came to comment on this post.  When Sarah was selected as a pilot, then Rajasthan Patrika (Patrika News) posted the news and the headline as ‘Sarah became the first Muslim pilot of the country’ (साराह बनी देश की पहली महिला मुस्लिम पायलट) and there are more than 6.5 thousand comments.  The third-largest comments are on that post, which is related to the conversation from Hindu to Muslim.  Two beef-based posts attract more attention to the reader and are included in the top five posts of this study. It must mention that out of nine posts, four posts are political statements given by the members of the concerned ruling parties or related to them. “Amar Ujala” is one of the media organization, who posts controversy headlines regularly and the user wants to comment on these headlines. 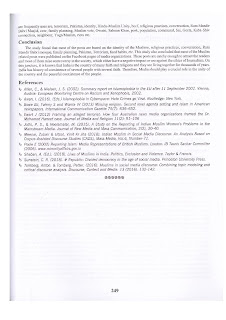 The study found that most of the media organizations use the word ‘Muslim’ or ‘Musalman’ in their headlines, which are catchy and invite the readers to react as the comment, share and like the post. Most of the headlines present the horrible situation of India in which Muslims play a negative role.  The headlines seem to present Muslims as the main challenge to maintain democracy in India.  Their population is increasing day by day and became a serious problem.  Muslim terrorism affects the life of the world including India.  The food habits of Muslims are also a big problem for this country and Muslims are only beefeater not cherish the cow.
This study also analyzed the subjects of the headlines and made a topology of subjects.  This also finds the concerned media organizations. The words which are frequently used are, terrorism, Pakistan, identity, Hindu-Muslim Unity, beef, religious practices, conversation, Ram Mandir Babri Masjid, cow, family planning, Muslim vote, Owaisi, Salman Khan, pork, population, communal, Sai, Geeta, Kaba-Shiv connection, neighbour, Yoga/Muslims, riots, etc.
The study found that most of the posts are based on the identity of the Muslims, religious practices, conversation, Ram Mandir Babri mosque, family planning, Pakistan, Terrorism, food habits, cow, Kaba-shiv connection, Muslim vote, Yoga, etc. Media and the public have a mindset to talk about Hindu-Muslim relations and the majority of people in India think that Muslims are the outsiders of this country. Online hate practices by the people or media organization are frequently seen on social media and the hate comments provoke users to write anti-social comments. At the same time, media organization found that the negative headlines attract people to like, share and comment, therefore, media persons like to make these types of headline in regular intervals of time and post on concerned Facebook page’s of their organizations.
This study also concluded that most of the Muslim related posts were published on the Facebook pages of media organizations. These posts are catchy enough to attract the readers and most of them raise controversy in society, which either has a negative impact or is against the ethics of Journalism. At this juncture, it is known that India is the country of many faith and religions and they are living together for thousands of years. India has a history of coexistence of several people with several faith. Therefore, Media should play a crucial role in the unity of the country and the peaceful coexistence of the people.

Edited Book on Media (in Hindi)

A Collection of Maithili Poems

My presence on other world